As is human nature, we all need to relax and have fun from time to time. Playing card games can be a great way to have a good time with friends or family. With everyone glued on their smartphones these days, a good card game is a welcomed change.  Card games remain an unbeatable form of entertainment as they can be played at any time, anywhere. With the tons of card games available today, it may be a daunting task finding the best card game. It’s even more difficult to find a card game that is family-friendly, easy to learn, and super fun. This is where SeQuEl comes into play. 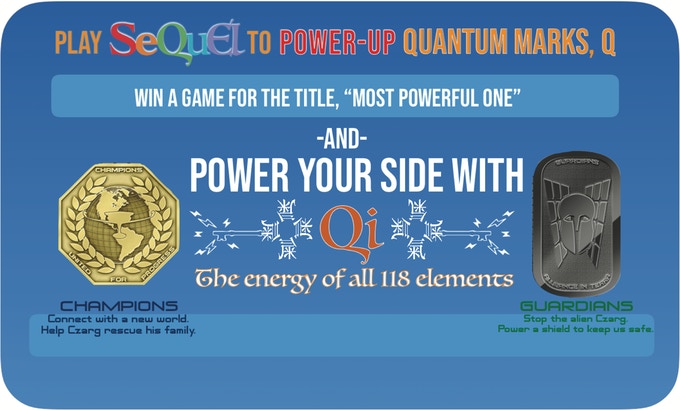 SeQuEl is a lively and unique card game intended for people that like coins, Trojan warriors, magnets, and elements. The game is meant for 2-6 players ranging from the age of 12 and up. The card game includes 118 Quantum Marks, with each representing an element and has a number.  Players can engage casually to see who builds the longest and highest sequence, or they can choose a side whereby they can play for the power to bring an alien to Earth or stop the alien to keep Earth safe. SeQuEl is guaranteed to keep you entertained for hours, and it’s perfect for any occasion.

SeQuEl is played by taking turns, and it’s more of a game of wits.  It’s super-simple in concept. Play begins by dealing 5Q to all players. Basically, the card game involves comparing card values, though there are six special forces that determine a player’s options.

To win this game, you must create the most power by winning the most cards.  If you choose a side, you win the game by emerging the most powerful one by either bringing an alien to Earth or shielding the Earth from aliens.  SeQuEl is an incredible card game that relies so much on strategy and boosts your concentration.

Along with providing unmatched fun, SeQuEl familiarizes players with the names of the periodic table elements, their numbers, and structure.

If you love playing card games, you may want to try out a game that blends a modern touch and real elements. A game that will unleash your imagination like no other. Overall, SeQuEl is a classic card game that could find a place in every home.  It’s affordable and ideal for gaming on the go. Kick your obsession with video games and digital media and get in touch with something more tangible – the SeQuEl card game.

For more Detail Visit Now: A card game for people that like coins, Trojan warriors, magnets, elements & who ever wondered if we are alone in the universe.

Almost 90% of solitaire spider freecell card games are winnable. You just need to find the key to make room in the tableau. The space will let you get cards of the same suite while you untangle the whole layout. Try fathoming the following guide if you want to do so! Don’t always focus on […]

How Is Esports Transforming Gaming?

Esports is perhaps one of the most significant avenues for revenue in the gaming industry. Contrary to popular belief, Esports has been around for the longest time. The very Esports tournament was conducted at Stanford University in the year 1972. Since then, this facet of the industry has progressed significantly. However, it doesn’t mean it’s […]

SeQuEl- Elevating Entertainment to the Next Level

As is human nature, we all need to relax and have fun from time to time. Playing card games can be a great way to have a good time with friends or family. With everyone glued on their smartphones these days, a good card game is a welcomed change.  Card games remain an unbeatable form […]